WALK FOR A CURE 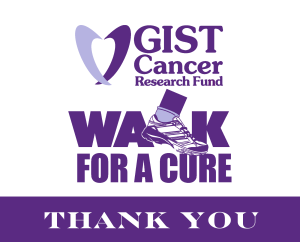 The GCRF Walks For A Cure in New York and San Jose was a great success
due to your generosity of time and donations.
To those of you who couldn't attend, please be generous and donate today! 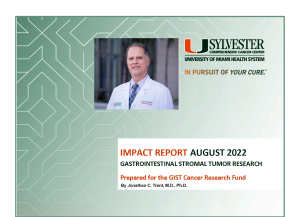 Dr. Jon Trent, MD, PhD, and staff for GIST Cancer Research at the University of Miami, Sylvester Comprehensive Cancer Center has been exploring the use of a new medicine for GIST called Procaspase Activating Compound (PAC)-1. PAC-1 is designed to make other drugs more effective.

During the past 10 years, Sylvester Comprehensive Cancer Center’s Sarcoma Program has developed into the largest sarcoma center in the southeastern United States. With more than 20 dedicated, multidisciplinary, board-certified sarcoma doctors on staff, Sylvester serves approximately 900 new patients per year.

AN INVITATION TO THE 2022 OHSU GIST EDUCATION CONFERENCE

Details will be sent out to all those who register.

“Thank you to Tania, Robert and everyone with the GIST Cancer Research Fund for your loyal support of the OHSU Knight Cancer Institute in our mission to end cancer as we know it. I am inspired and humbled by your commitment to us. Thank you again.” 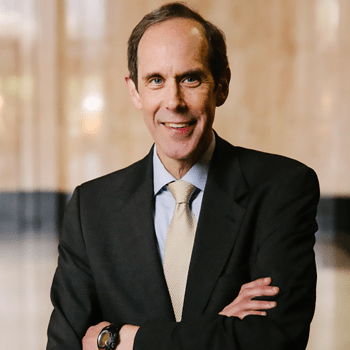 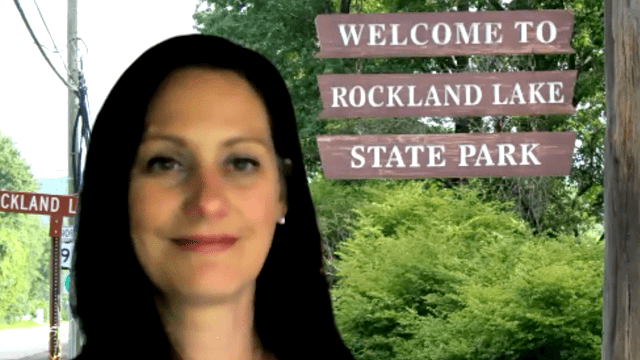 Dr. Anette Duensing, GCRF's advisor, Associate Professor of Pathology and member of the Cancer Therapeutics Program at the University of Pittsburgh Cancer Institute gives an update on her latest research on GIST Cancer.

Why Second Opinions Matter for Sarcoma 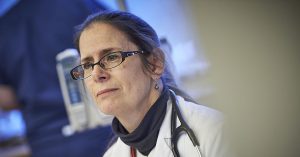 Not only do Fox Chase physicians have extensive experience in diagnosing and treating sarcomas, but they head panels of experts tasked with writing and updating sarcoma treatment guidelines that are used both nationally and globally. They also work with other world-renowned experts to conduct clinical trials, both for early and advanced stage sarcomas.

“When we see a patient with sarcoma, we think about how to best treat them as a team,” said Margaret von Mehren, MD, Chief of the Division of Sarcoma Oncology at Fox Chase. “Our program includes specialists in sarcoma medical oncology, surgical oncology, orthopedic surgical oncology, radiation oncology, radiology and pathology who review tumor biopsies and imaging to determine the best possible treatment for each case.”

A Message of Hope

GCRF received a special letter from the spouse of a GIST Cancer patient giving us all hope.

The 2019 GCRF Walk For A Cure in New York was held on September 22, 2019 at Rockland Lake State Park. Thanks to all who attended and helped to save lives.

Gastrointestinal Stromal Tumor or GIST is a rare, orphan cancer which starts in a type of tissue called the stromal or the body’s connective tissue (fat, muscle, blood vessels, deep skin tissues, nerves, bones or cartilage). GIST is a silent cancer often spreading before the patient has symptoms. Each year, approximately 5,000 adults in the United States alone are diagnosed with GIST Cancer. According to the American Cancer Society, many doctors misdiagnose GIST as another type of GI cancer. The lifesaving treatment for GIST is delayed and the GIST Cancer destroys lives. The overall five year survival rate of people diagnosed with a malignant tumor has been estimated to be 76%.

Looking For A GIST Cancer Doctor? 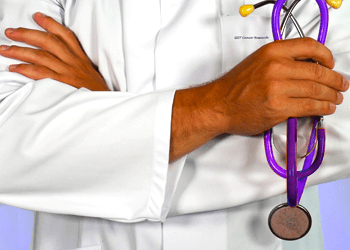 GIST is a rare form of cancer that most doctors misdiagnose or are not familiar with the appropriate treatment. If you or a loved-one is diagnosed with GIST, getting in touch with a physician who specializes in GIST Cancer is of utmost importance. These doctors and researchers deal with this disease on a daily basis and can help guide you to the right treatment.

In addition to the GIST Cancer Research Team of physicians, researchers and nurses, the following link will put you in touch with domestic and international GIST Cancer specialists. 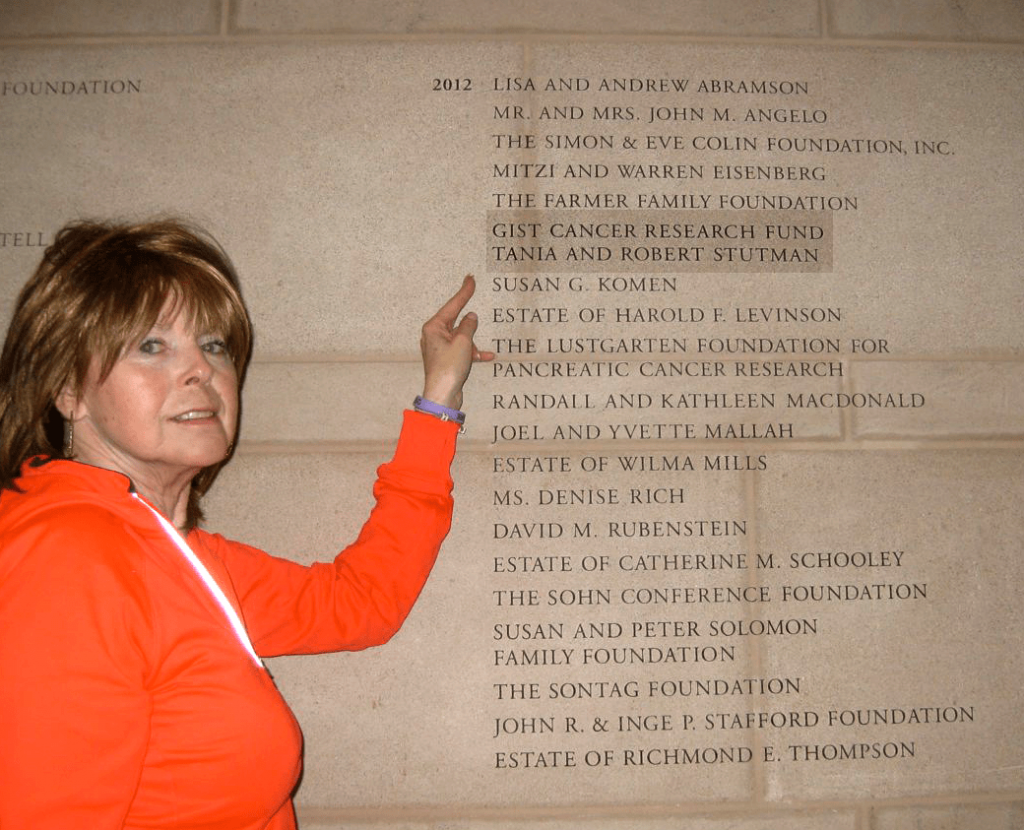 In 2012, The GIST Cancer Research Fund and Robert and Tania Stutman were honored by Memorial Sloan Kettering Cancer Center for GCRF’s generous donations given for GIST Cancer Research. Their names were etched into MSKCC’s donor wall for posterity. For almost twenty years, The GIST Cancer Research Fund has been tirelessly fighting to raise funds to eradicate this deadly disease with no staff, corporate headquarters or overhead. Since 2002, the foundation has raised more than $10 million and MSK has been the beneficiary of $1.6 million. Events including walkathons, 1,000-mile Cycling for a Cure bike rides, golf outings and galas now span the nation. (Other GCRF beneficiaries include Fox Chase, Brigham and Women’s Hospital in Boston, Oregon Health Sciences University Cancer Institute, and MD Anderson Cancer Center in Houston.) At MSK, the GCRF supports the work of Dr. Antonescu and Dr. Ping Chi.

Robert and Tania Stutman join the generous philantropists including Susan G. Komen, who donate to MSKCC. The GCRF has raised $10 million dollars for GIST Cancer Research and has given 100% of these fund to finding a cure for GIST Cancer. As Tania Stutman said, ‘I’m not only battling for my life, I’m fighting for the lives of others.’”

HONOR MY LIFE BY LIVING YOURS!

Elisabeth Andreason, Executive Director of The Andreason Group at Morgan Stanley, a financial advising and investing group located in Walnut Creek, California, generously donated $5,000 to the 2019 San Jose Walk For A Cure. 100% of this donation will go directly to the GIST Cancer Doctors and Research labs to keep hope alive to find a cure. Thank you very much Elizabeth and Morgan Stanley!

Save Lives And Show Your Feelings About GIST Cancer

GCRF has GIST Cancer Bracelets, Ribbons and T-Shirts available for sale. By wearing and displaying them, you are spreading a message and awareness to find a cure for this rare cancer.

Donate today to spread awareness and find a cure! To Purchase, Click On The Button Below. 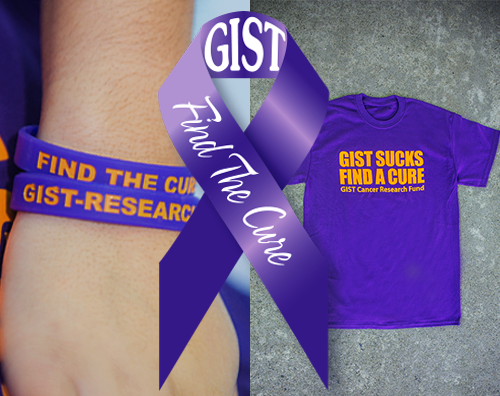 AmazonSmile is a simple and automatic way for you to support the Gist Cancer Research Fund every time you shop, at no cost to you. When you shop at smile.amazon.com, The AmazonSmile Foundation will donate 0.5% of the purchase price from your eligible AmazonSmile purchases. Please support GCRF when you shop on Amazon! Click on the amazon smile logo for more information.

A Message From Dr. Jonathan Fletcher

Dr. Jonathan Fletcher, GCRF's GIST Cancer Advisor and researcher at Brigham and Women's Hospital in Boston, Massachusetts and members of the Fletcher Lab give a message of hope as well as updates on their GIST Cancer research. Thank you Dr. Fletcher and Lab members for all that you have contributed to the fight for a cure of GIST Cancer.

Thank You Dr. Mike Heinrich and the Heinrich Lab For Walking For A Cure In Portland, Oregon

The GCRF is a GIST patient-run non-profit (501(c)(3)) that has supported the GIST basic research being performed in the laboratory of Dr. Michael Heinrich* here at OHSU, as well as numerous other GIST research programs around the United States, for nearly two decades. The funds donated to research from the GCRF fund research for improving the care of GIST patients. Without the support of the GCRF, the immense progress that has been made in improving GIST patient care at OHSU would not have been possible. 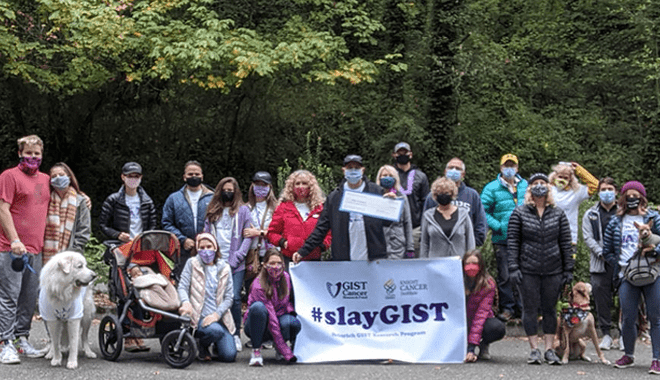 *Dr. Mike Heindrick has pledged to match all donations made from our participants.*

Dr. Michael C. Heinrich, one of GCRF's GIST Cancer Advisors and researcher at The OHSU Knight Cancer Institute in Portland, Oregon, gives an update of his work and progress of finding a cure for GIST. 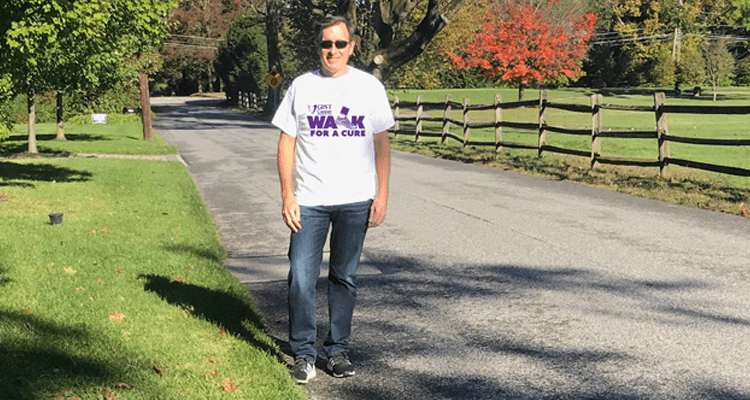 GCRF's own GIST Cancer advisor, Dr. Ron DeMatteo, of Penn Medicine in Philadelphia, Pennsylvania, begins the GCRF Virtual Walk For A Cure. He is the Chairman of the Department of Surgery and a Surgical Oncologist who specializes in treating abdominal sarcomas (GIST) and  diseases of the liver, bile duct, gallbladder and pancreas. We are so grateful to have his support in the cure for GIST Cancer.

Other GSRF Walkers include GCRF Board Member, Wendy Kapiloff and family in memory of her husband, Lenny Kapiloff. 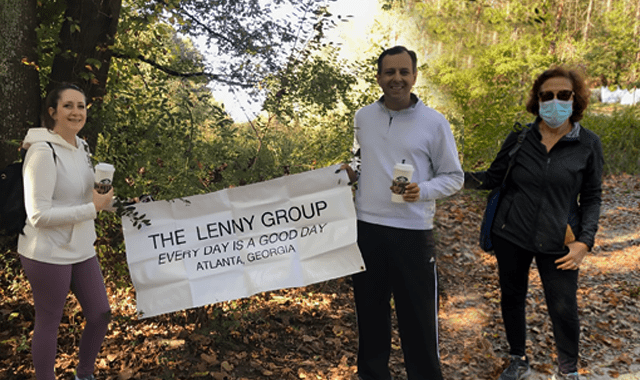 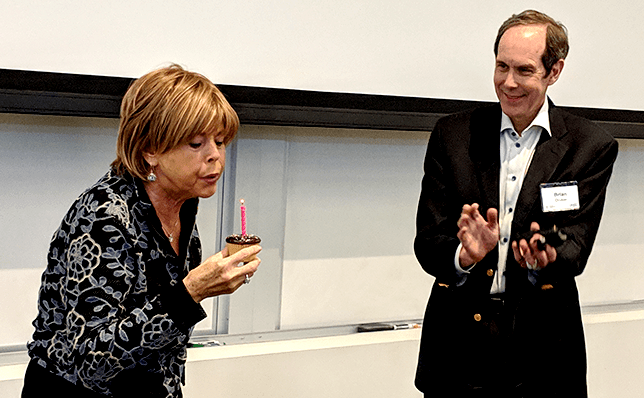 The OHSU Knight Cancer Institute & the GIST Cancer Research Fund held a one‐day education conference on May 7 in Portland, Oregon. The conference highlighted the advancements in Gastrointestinal Stromal Tumors (GIST) Research. Among the presenters was OHSU’s Dr. Brian Druker, developer of the drug Gleevec, Dr. Chris Corless and Dr. Michael Heinrich. A special presentation was given by Dr. Brian Druker to celebrate Tania Stuntman’s 70th birthday. After 21 years since she received her GIST Cancer diagnosis, she is still fighting and keeping hope alive.

Walt Frazier is a two-time NBA champion with the New York Knicks, a seven-time NBA All-Star and a member of the Basketball Hall of Fame. His retired No. 10 Knicks jersey is hanging in the rafters in Madison Square Garden. The NBA veteran is also known to be the GCRF's very own spokesperson. Walt has attended the GCRF New York Walk For A Cure for 18 years. His loyalty and commitment to GIST Cancer Research is relentless and he always finds the time to "be there" for the GIST Cancer Research Fund in good times and bad. Thank you Walt for all you have done and know that we hold a special place for you in our hearts!

Welcome to the Heinrich-Corless Research Lab

A look behind the scenes in the lab of Dr. Michael Heinrich and Dr. Chris Corless at the Oregon Health & Science Center/Knight Cancer Institute. Here is an overview of the current research being performed to find a cure for GIST Cancer.

“I started with just a little website,” Tania says. “I went on local radio. I went to our local paper and told them my story.” In 2001, she held her first walkathon and raised $23,000. In 2018, the foundation has raised more than $10 million dollars and every penny has gone to GIST Cancer Research.